LOCALISED will establish a reliable framework of the current status of the energy sector at NUTS-3 level to plan feasible future scenarios and to monitor the changes from real data.
Providing information at lower scales needs to strike an adequate balance between 1) the downscaling of existing information on mitigation, adaptation and impacts; and 2) the design of innovative information products and tools to targeted focus groups. LOCALISED makes use of the EUCalc model to generate EU and Member State-level decarbonisation pathways consistent with net-zero ambition and reflecting a variety of points of view in the literature. The national pathways generated are then downscaled from the national level to NUTS 3 level by making use of auxiliary data on sub-national scales employing a multitude of statistical approaches and auxiliary data. The combination of consistently derived decarbonisation pathways with an energy model and the downscaling of its outputs allows LOCALISED to evaluate the impact of the energy transition on the individual NUTS 3 regions in Europe. 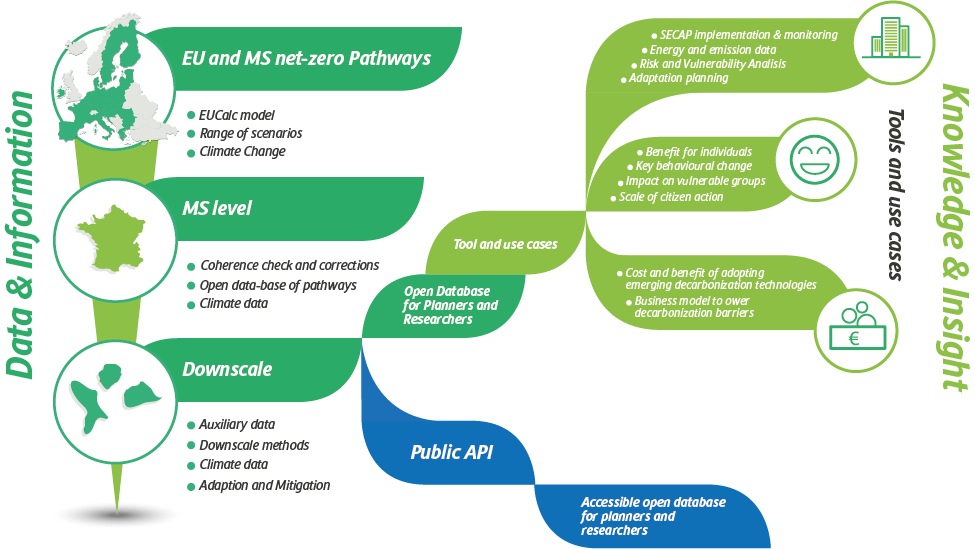 Alongside the downscaled outputs of the EUCalc model, LOCALISED will integrate data on climate stress from pre-calculated sources (e.g., linking to Copernicus Climate Change Service (C3S) and other climate services) in order to contextualise climate impacts when it comes to the challenge of adaptation. Feasible adaptation measures and strategies will be identified for any given region and a measure of transferability will be designed. The transferability measure will inform on how feasible the application of the same option is across cities and regions that are structurally similar and exposed to comparable climate.

Therefore, LOCALISED makes it possible to pinpoint what are feasible combinations of adaptation and mitigation measures for each region. Finally, the project understands that the generation of such regional data from energy and climate models is in itself a valuable output. Hence, the database containing this information will be made available to planners, policy makers, and researchers.

Establishing a comprehensive database of decarbonization pathways is necessary to downscale their outcomes to a spatial scale more conducive with local decision making. For this purpose, a set of decarbonization pathways will be derived for individual EU member states using the EUCalc model. Near-term EU policies and targets, as well as country-specific long-term strategies will be reflected. Pathways include information on the demand for products and energy, the required level of energy and energy-supply technologies and the associated Greenhouse Gas (GHG) emissions. Both behavioural – and technology – driven mitigation will be integrated in order to explore the full decarbonization space. This poses a challenge as the majority of integrated models focus primarily on the technology-side of mitigation.

Therefore, we plan to downscale the pathways for each EU country to their NUTS 3 regions. The goal here is to analyse the impact of the country-level pathways on the individual NUTS 3 regions, evaluate the feasibility, and identify potential bottlenecks. Based on the results, best practices for both pathway creation and implementation will be identified.  The process of downscaling the pathways essentially involves collection and analysis of NUTS 3 regional metrics such as GDP, building stock, transport infrastructure, land use and land cover, etc. Some of the potential challenges include identification of relevant proxy metrics that can aid the downscaling methodologies, data availability and quality.

This work will result in a comprehensive database of current and future metrics for every NUTS 3 region in Europe, alongside the pathways. This data will be made available via an open access data sharing platform.

Addressing climate change concerns of local businesses and industries in the EU is an important and integral part of decarbonization pathways in the EU regions. Unprecedented changes in the environmental factors such as temperature and precipitation not only have a direct impact on some of the key economic sectors such as agriculture and tourism but also indirectly impacts the business operations through changes in supply chain, labour availability and productivity, and demand patterns. Therefore, in designing an effective mitigation and adaptation strategy for the EU businesses in line with regional decarbonization pathways, it is imperative to first identify the vulnerability of the key EU economic sectors to climate change and climate policies and regulations aimed at curbing its negative consequences. Developing a unified vulnerability index for businesses in agricultural, manufacturing, and transportation sectors will showcase the geographic and sectoral distributional impact of climate change on the EU businesses.

Synergies between mitigation and adaptation

Adaptation and mitigation synergies and trade-offs are specially felt by cities (IPCC, 2015) , since most of the human factors that determine our decarbonization paths and sustainable development (energy consumption, poverty, health, etc.) occur in urban areas. Cities are home to about 75% of the population of the EU-28 countries (Eurostat, 2021), and the urbanization trend in Europe is projected to continue (Eurostat, 2021).

In addition, synergies between adaptation and mitigation plans and its different impacts can act as a driver to implement climate change plans, but may also act as a barrier (IPCC, 2022).

Focusing our analysis on the existing synergies is therefore essential to lead LOCALISED to a successful outcome of feasible adaptation and mitigation options in the NUTS3 regions in the EU-28.

Aligning local strategies with national targets and implementing mid and long-term strategies and goals consistent with the EU objectives is one of the main challenges local authorities and cities face. In this context, the Covenant of Mayors for Climate and Energy initiative is a relevant instrument at the local level to achieve climate and energy objectives. Up to this point, more than 7.755 towns and cities have voluntarily joined the Covenant of Mayors framework. However, since the beginning of the initiative, the background has clearly changed, regarding both, the general scope, the available resources, and the coherence with the Sustainable Development Goals (SDGs). Only a few municipalities have presented monitoring reports due to the complexity of the process, the lack of reliable data and or the required resources. In this context, LOCALISED will provide added value by establishing clear links and developing an easier to use tool for implementing and dynamic monitoring of Sustainable Energy and Climate Action Plans (SECAPs). In a nutshell, the downscaling will allow the concretion, implementation, and monitoring of SECAPs, as the basis to adapt and monitor the SDGs at the local level.

Narratives of change for citizens

The LOCALISED project develops credible and effective narratives that help to bring citizens and regions on a path of change. The starting point is as follows: Storylines and narratives told to boost sustainable development are too general and intangible. For example, “everyone can contribute” or “air travel is bad for the climate and should be replaced by trains.” But this lacks a connection to the real everyday life of citizen’s and also to regional contexts. This is the gap addressed by the project and the specific tools that we will develop.

To get there, we need narratives and stories that build on specific regional contexts and take into account the scope for decision-making of municipalities and individual citizens. Only then they do have a chance to become an effective tool for change. The disaggregated scenarios from work packages 3, 4, 5, and 6 will help to identify the key leverage points for aim. Besides this, the effects on different groups will be considered.

The continuous involvement of citizens and authorities will help to make these narratives effective. One essential participatory tool in the project are the citizens assemblies (also: citizen councils), where citizens work together with scientists e.g. on lifestyle choices, and mitigation measures. See our Blog for an example from Austria and the Knowledge Network on Climate Assemblies for other european examples.

GET IN TOUCH WITH US!