Climate change is affecting both regional and global weather patterns, increasing the frequency and severity of extreme climate events such as floods and windstorms, or producing extreme temperatures and wildfires as a result. These events can therefore affect society causing disruption or damage to the essential services provided by critical infrastructures.

What can we do to avoid the consequences of these critical risks posed on the grid?

One of the main objectives that the IREC’s Power System group has detected is the mitigation of these risks while increasing the grid resilience and preparedness against disruptive events. From IREC, we think that this goal can be achieved following the steps conceived below.

Because is worth noting that Impact Zero does not exist, but we must made an effort to minimize it. 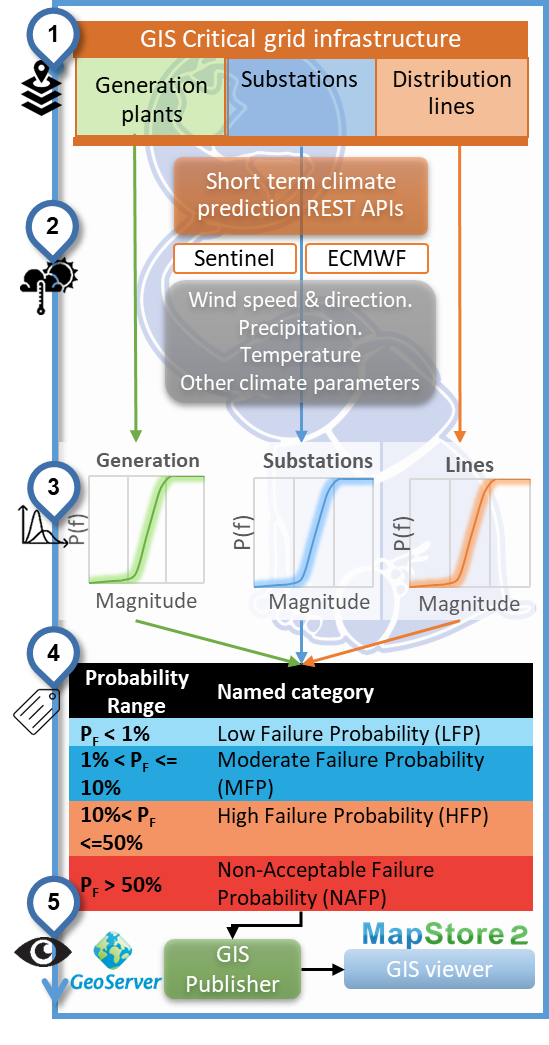 How these steps can be integrated in one single solution?

IREC has carefully designed GridWatch, a stack composed of open source services, totally scalable and flexible for new integrations, that is capable of performing all the steps previously mentioned in one single flow, allowing the end-users to know about the risks they are subjected to, and if the system is protected from them.

This tool has the capability of monitoring and analyzing weather-based risk on the grid. It offers the calculation of wind and flood risk of the assets according to weather information gathered from weather services such as sentinel-weather or ECMWF services. However, due to its flexibility, also allow the integration of fire detection and potential disruption provoked to the grid, or the sensor application for the real-time measure to feedback the algorithms responsible for prediction using machine learning, and even citizen interconnection to increase awareness.

So, what is the output to the end-users?

At the end of the day, what GridWatch provides to the end-user, is the capability to visualize the risk level per electrical asset through the use of suitable KPIs, timelines, and heatmaps in a user-friendly interface that manages all the information.

Also, the warning alarms for critical events detected help the power distribution control center can take decisions according to the information received, such as setting adaptive and/or corrective measures and reinforcing weak locations of the grid, or designing emergency plans to mitigate failure consequences.