The importance of power grid resilience. How to address it through decarbonisation. 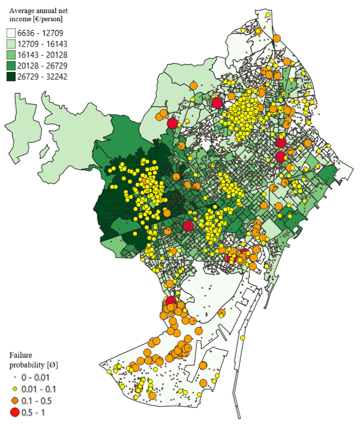 The negative consequences of the COVID-19 pandemic are innumerable, be they health, economic, technological, or social. However, once much of the storm has already passed, we can learn and improve our society from it. Using this idea as a starting point, the Catalonian Energy Research Centre (IREC) collectively with researchers from of the Group of Construction Research and Innovation of the Polytechnic University of Catalonia (UPC -GRIC) launched the project ComMit-20 with the aim of establishing the long and short-term impacts of the COVID-19 pandemic concerning energy consumption, changes in usage patterns, and increased indoor environmental quality requirements in buildings.

Even though it is certain that one of the main impacts of COVID-19 was on city wellbeing and health, the power grid system has not been an exception from the pandemic’s impacts.  Confinements and changes in consumption patterns put the grid system to the test, such as increased electricity demand in urban areas that did not have sufficient capacity to supply it. Consequently, the grid had to adapt to scenarios that may have seemed impossible before. This critical and unprecedented situation brought to the table once again one of the most studied characteristics of electricity grids in recent years: power grid resilience.

Until a few years ago, there was no distinction between the reliability and resilience power grid and in fact, both concepts referred to similar meanings. However, their differentiation appeared due to the necessity to address high-impact-low-probability (HILP) events, in other words, occasionally events capable of massively damaging the system. Moreover, three different hazard events are analyzed in the field of power grid resilience:

Considering these three aspects, and within the framework of ComMit-20, IREC has been focused on making the electricity grid more resilient to HILP events, which are expected to increase their frequency and make the grid more vulnerable. As a part of the task, a study on the resilience of Barcelona’s electricity grid was conducted, with the aim of analyzing long-term impacts of HILP events. As an example, simulations of disruptive scenarios for 500-years flood scenarios were carried out using technical data of the power grid and socio-economic data of Barcelona to give it a more multi-perspective view.

The results obtained from the study showed that almost 20% of the city’s substations would have a moderate or higher probability of failure, which could lead to a cascading breakdown of the system. Moreover, the impact of this catastrophic weather event would not be uniform across the city, and some neighborhoods would be more susceptible to flooding.

One possible solution to mitigate those impacts and increase the power grid resilience would be the installation of renewable energies in those risk areas. This adaptive measure would help compensate for that energy not delivered in those points where the grid could fail, and at the same time, it would help to decarbonise the city and to reach the net-zero scenario. In this way, this measure would not only mitigate the impacts of the event, but also help adapt to climate change by decreasing the frequency of occurrence of those events.