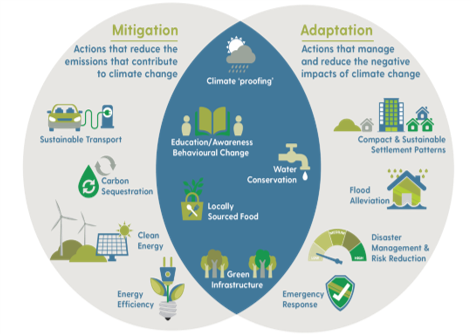 Adaptation and mitigation synergies gap: a problem and an opportunity

Adaptation and mitigation synergies gap: a problem and an opportunity

Adaptation and mitigation are not the same topic. However, shall they follow different paths? Absolutely not.

In fact, to combine adaptation and mitigation measures might lead to a more cost-efficient outcome of the processes, as well as avoid maladaptation (the problem of increasing risks from adaptation) and malmitigation (the problem of increasing risks from mitigation) (Grafakos, S. et al. 2020). However, sometimes reality doesn’t follow the right direction. The research conducted in the paper Integration of mitigation and adaptation in urban climate change action plans in Europe: A systematic assessment (Grafakos, S. et al. 2020) states that there is an existing gap in this sense.

Nevertheless, the number of cities taking actions against climate change and starting mitigation and adaptation plans is increasing in recent years. National policies, along with international initiatives such as the Covenant of Mayors or the UN Compact of Mayors are raising awareness and being important drivers on these plans’ implementation (Reckien et al. 2018). Even more, probably the fact that mitigation had been included in most of the analyzed plans can be caused by the action of these organizations: a GHG emissions profile is integrated in a 71% of the analyzed CCAPs, whereas a 60% of them have addressed a vulnerability profile in them.

Due to these studies, we can affirm that the mentioned gap offers an opportunity to act in there, taking profit of this awareness raise and introducing synergies in between mitigation and adaptation plans.

In this sense, the LOCALISED project will provide decision takers and stakeholders with diverse tools that might help them. To offer already calculated feasible adaptation and mitigation measures for NUTS3 regions will facilitate a lot the previous processes to implementation and help create more synergies in between both kind of plans.